Our Mariachi Trio is led by Aurelio Reyes, a native of Chiapas, Mexico. Earning the nickname, Troubadour from the Southeast, Aurelio has performed in various radio and TV programs, recorded a full album, and went on several local and international tours. After moving to the US, Aurelio began to play as a solo musician in restaurants, bars, nightclubs, and private events, usually accompanying himself on guitar, singing along to pistas (recorded background tracks) of his own and other composers’ music, or performing with a live mariachi ensemble. His music has been featured in a couple of independent films, commercials, and television series.

Booking Local Mariachi Trio from Ocdamia Music Group, LLC. grants you access to our pool of professional Mariachi Band in Southern California, attentive customer service and expert advice from our friendly staff 24/7, and most importantly, our customer guarantee.

In the event that the Mariachi Trio or any member of the Local Mariachi Band cancels due to unforeseen events, our team will find a suitable replacement.

We guarantee that your Mariachi Trio is covered 24/7 against any eventuality.

Booking your Mariachi Trio for your wedding and special event with peace of mind. Sit back, relax, and be entertained with concert-like performances from OMG artists and local live musicians for hire!

What is Mariachi Band?

A Mariachi band is a musical group that specializes in traditional Mexican Music. It can be as small as a group of three musicians (mariachi trio) to more than twenty musicians. Our Mariachi Trio plays for weddings, Quinceaneras, baptisms, birthdays, funerals, and other events. We also accommodate requests to provide music for traditional customs such as waking up a loved one to music and serenading them throughout the day.

Why is Mariachi Music Important?

What are the Best Mariachi Songs?

Anyone can argue that their favorite mariachi song is the best, however these are the songs that come highly requested by our clients: El Rey, Guantanamera, Cuando, Cuando, Cuando, Cielito Lindo, and Mexico Lindo Y Querido.

What are the Mexican Singers Called?

The direct Spanish translation of singer is cantate or cantor, however, traditional Mexican bands are called Mariachi. Often a group of more than three musicians, it includes a singer, violin, vihuela, guitar, and other wind instruments. 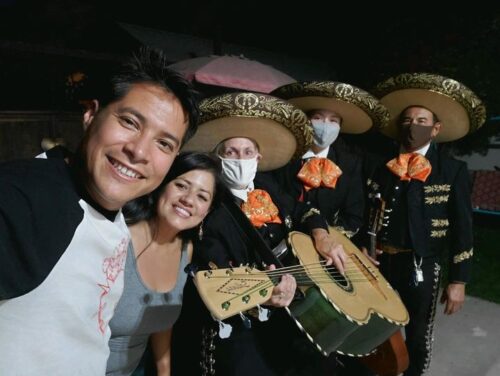 Adrian C.
Rated 5 out of 5
Private Residence, Los Angeles, California
The Mariachi Trio lead by Sally was PERFECT! Thank you so much.