Jackie is a Los Angeles based harpist, specializing in harp performance, recordings, and lessons with over 18 years of experience. She holds a Bachelors in Harp Performance from the California Institute of the Arts, under the tutelage of mentor and new music pioneer, Susan Allen. While at the institute, Jaclyn performed with the New Millenium Chamber Orchestra, often at the Redcat Theater, premeiring works by prominent 21st century composers such as Sofia Gubaidolina in 2011.

Jackie has worked with world-renowned musicians including Laurie Anderson, Van Dyke Parks, Inara George, Ulrich Krieger, and harpists of the London and Los Angeles Symphony Orchestra. She has performed throughout the United States, France, and England. Jackie most recent recording is the critically acclaimed album, Postcard from Heaven, released by New World Records. She is featured on the title track alongside Susan Allen.

Jackie enjoys performing as a solo harpist at weddings, corporate functions, and other private events. At weddings, she often plays classical and contemporary music for wedding ceremony and cocktail hour.

Booking local solo harpist in Los Angeles from Ocdamia Music Group, LLC. grants you access to our team of professional local harpists, attentive customer service and expert advice from our friendly staff 24/7, and most importantly, our customer guarantee.

We guarantee that your solo harpist is covered 24/7 against any eventuality.
In the event that a solo harpist Los Angeles cancels due to unforeseen events, our team will find a suitable replacement.

How much does a full size harp weigh?

A typical pedal harp weighs between 80 to 90 pounds while a lever harp generally weighs lighter. Often times a pedal harp needs to be transported using larger vehicles while a lever harp is smaller and fits most cars. However, a full-size harp has musical benefits, creating a richer sound and can play most classical pieces.

Can a Harp be amplified?

Is Harp sheet music the same as piano?

Can a Harpist Play Modern Tunes?

Although a harp is a classical instrument, it can be suited to play both modern and contemporary music. The music piece can be arranged for the harp to play current music. However, the music will still have a distinct harp sound that is light, airy, and ethereal. We have the best harpist in Los Angeles who plays Disney tunes, pop and other genres.
Booking and General Policy 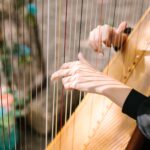 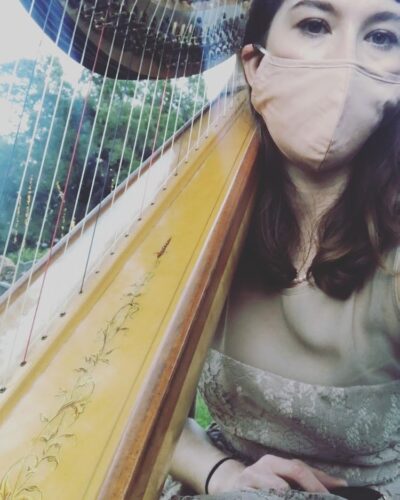