Being a highly energetic violinist playing upbeat modern music, she enjoys performing live and interacting with the crowd at weddings, corporate functions, and other special events.

Booking artists or musicians from Ocdamia Music Group, LLC. grants you access to our team of 100+ professional musicians, attentive customer service and expert advice from our friendly staff 24/7, and most importantly, our customer guarantee.

We guarantee that your booking is covered 24/7 against any eventuality.

In the event that an artist or musician cancels due to unforeseen events, our team will find a suitable replacement.

What is a dancing violinist?

A dancing violinist is a total performer who dances along to the music, sometimes with a set choreography, while playing the violin. It has been popular in recent years, ushering in a new style of violin performance. Our hip hop violinist in San Diego, Melissa, is a talented violinist and gifted dancer who can definitely wow a crowd!

How do I create a playlist for my wedding reception?

A wedding reception playlist is equally important as the playlist for wedding ceremony. Once you book with OMG, you will have access to our portal where you can select songs for the wedding reception, or any part of the program. We also have our own go-to playlist at wedding receptions that we update constantly so you would not have to worry about planning your music.

What type of violin do you use?

Can you play violin on beach wedding?

Yes! A violin can be played almost anywhere, as long as the conditions are dry. Violins and other wooden instruments are sensitive to moisture and water so it is important that they do not get wet. Given that, violin music is a great background music for a romantic beach setting.
Booking and General Policy 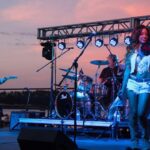 We chose Melissa Barrison to play Electric Violin alongside one of our DJs. It's been months and guests from our wedding still talk about how incredible Melissa was. It's not just someone playing over the tracks, it's an absolute experience. She turned it into a concert dancing alongside guests and absolutely shredding on the violin. There were faces melting all over.

Trust Margie, she'll get you set up with a perfect musician for any event.